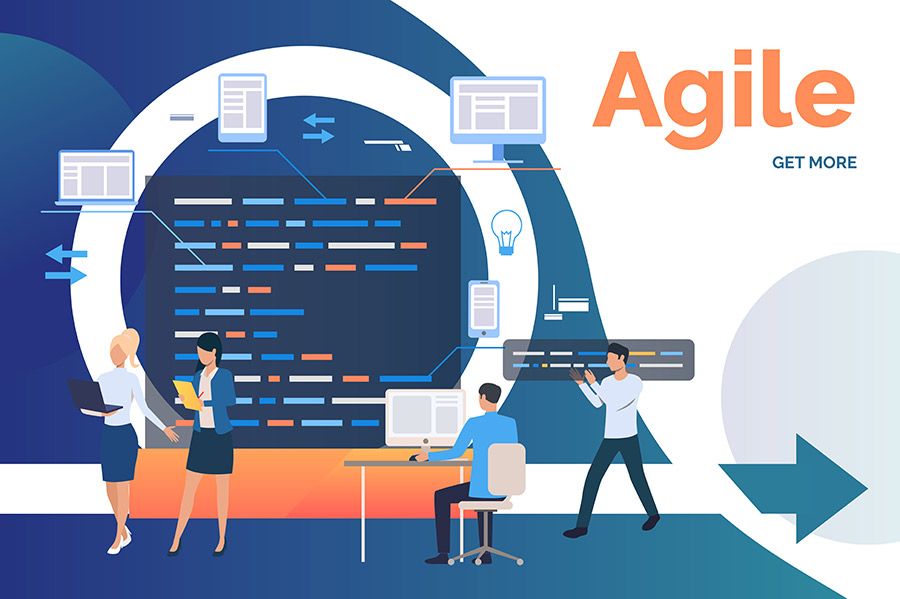 Agile might be considered a significant concept. On the other hand: Agile management is nothing more than that. When we talk about leading and managing work in the 21st century, we should be talking about agile. If private sector businesses are to thrive in the 21st-century marketplace, they must adopt a more agile approach to business operations. To meet the gold standard of 21st-century organizational performance: instant, intimate, friction-free, incremental benefit at a large scale, agile is essential for all businesses to implement.

When discussing leadership and management in the twentieth century, it was common, to begin with, the premise that everything was run from the top down by bureaucrats. We could have discussed various subtopics, such as teams, R&D, de-layering, re-engineering, restructuring, zero-based budgeting, quality management, and the like, to amend or enhance top-down bureaucracy. However, the underlying assumption was that the organization we were discussing would remain a top-down bureaucracy following the meeting. This presumption was unaffected by any of the adjustments or modifications.

Now that we’ve shifted our focus from top-down bureaucracy to bottom-up agility, it’s time to talk about leadership and management from a new perspective. Management subtopics, such as digitization, big data, ecosystems, platforms, and artificial intelligence (AI), can be used to explain ways to enhance agility. All these debates, however, will be in vain unless and until the company has the adaptability necessary to put these ideas into practice

If the company slips back into the 20th century of trying to execute these concepts through top-down bureaucracy, there will be little or no benefit from it. When these terms are applied without a solid foundation of agility, digital transformation will be nothing more than a fad.

A chaotic series of social, economic, and political events might be considered a contributing factor to the Agile phenomenon. Even as capitalism and democracy are being questioned, the fundamental concept of leadership and management is being re-imagined. Top-down bureaucracy, on the other hand, was “designed to last” in a relatively stable world, but Agile management and leadership are “built for change.”

Even the idea of leadership itself is evolving. Leaders who continue to operate under the presumption that they can command, and demand loyalty are likely to be surprised by the new reality.

Why Agile Is Now a Thing

There are numerous reasons why Agile came to be. ‘Agile’ Financial considerations have played a role in the rise of Agile. As a result, it is also driven by human considerations: it provides a means of humanizing workplaces and utilizing workers’ full potential. The current generation, the best and brightest, has little patience for bureaucracy. Also, it can be a part of what Peter Drucker called the “virtuous firm,” as opposed to the “self-interested firm” that Drucker was talking about. Ultimately, it’s motivated by pragmatism, which is a must in today’s ever-changing business environment.

Recommended Reading: How to begin your first agile project

While this is going on, more and more evidence points to the necessity of agility. Most significant and fast-growing companies in the world use some version of Agile management methodology. According to Deloitte and McKinsey polls, over 90% of top executives place a high premium on being agile, yet less than 10% of companies are already extremely agile.

Increasingly, CEOs are realizing that they must adapt. Recently, the BRT (Business Round Table) stated that shareholder profits are no longer the sole aim of a firm. This is indicative. “Maximize shareholder value” has been the watchword of this club of approximately 200 influential CEOs for the past two decades, and its members have generally followed through.

Agile will necessitate significant alterations for most businesses. One McKinsey report stated that it will represent “a transformation in the firm’s core DNA” for some. This “calls into question deeply ingrained expertise about basic processes such as budgeting, capital allocation, or people appraisal,” according to Agile. Enterprise-wide Agile doesn’t require annual personnel evaluations to be done by ‘your boss. ‘Even a reasonably uncontroversial organization norm doesn’t have to be true.

How a New Age Is Created

The Age of Agile cannot be occurring if most companies have not yet adopted Agile practices. Answer: an era first arises very imperceptibly, especially for people who are living in the transition period.

An age’s beginning is never an easy process because it may take some time to fully comprehend what the new era entails. Also, the people who hold power typically oppose, deny, and resist such measures. They only took credit for bringing about the change after it had already taken root to some extent.

The Five Biggest Obstacles to Agile.

1. Consensus on What Agile Means

A basic notion of bureaucracy existed even if no formal description of it existed. Gary Hamel, a management expert, put it this way:

That’s how it’s done. It’s a cascade effect. It’s common practice for powerful people to appoint subordinates. Promotion is fought for by individuals. Compensation is linked to the position. The tasks are assigned. Managers conduct evaluations of their employees’ performance. Discretion is severely restricted by the rules.”

As anyone who worked in a 20th-century organization can attest, these were the assumptions upon which they operated.

In today’s world, there are many different interpretations of the term “Agile”.

Agility in the workplace is becoming more widely accepted, and some progress has been made toward that goal. With Agile, the goal is not to produce more work, but to extract more value out of the work that is already being done. It is essential to be fixated on providing clients with greater value.

To better understand what Agile is, there are numerous publications on the subject notably the Three Laws of Agile, The Heart of Agile, The Agile Manifesto, and many others.

2. Assuring that the company’s top executives are on board

Some executives in middle management in most large firms now understand the management revolution and have an Agile attitude. C-suite executives, on the other hand, are still lacking in their understanding of Agile and the ability to implement it. Even if nearly 200 CEOs of the world’s largest firms have agreed to lift a major barrier to Agile, more C-suite leadership is needed. To convince the C-suite that Agile is a good idea, change agents must be able to make their case succinctly and convincingly.

3. Combating Agile as A Buzzword

With most organizations assigning a high priority to becoming agile and very few being agile, it’s not surprising that many firms claim to be being Agile without much evidence. There are numerous types to choose from, including:

As the name “Agile” becomes co-opted into general common speech without the specialized meaning that provided the benefits that led to its expansion, there is a risk of the equivalent of Gresham’s Law: the devalued public understanding of Agile will erode the value of genuine Agile.

This demonstrates the significance of establishing a clearer understanding of Agile’s core values and concepts.

A lot of Agile’s first 15 years were spent trying to figure out how to make it work for teams, first with one team and then with many teams, and finally with a lot of teams. During the last few years, progress has begun to be made toward the wider goal of becoming the entire company Agile. In the areas of manufacturing and distribution as well as retail and petroleum, as well as strategy and human resources, as well as budgeting and auditing, progress has been made in our understanding of Agile.

However, more work needs to be done on these areas as well as how Agile provides a crucial base for 21st Century management subtopics including digitization, big data, and the Internet of Things ecosystems and platforms.

Until now, Agile has been a movement dominated by those who have put it to use. More than theories, practitioners have the Agile attitude. It is more of a practical approach than a philosophical one. In other words, it’s a tool for diagnosing and acting, not just a set of ideas. Knowledge gained through years of practice is the foundation of it. Many of the articles have been authored by champions of Agile. Several large consulting firms have recently entered the market, which is increasing the amount of marketing literature available.

The absence of business schools from the Agile world has been obvious in many situations as if they were content to teach the knowledge of yesterday. They could and should play a significant role in the future in a variety of ways.

There are two methods for analyzing the results of Agile transformation trips, both successful and unsuccessful. If GE had failed, how could Microsoft succeed? It is necessary to carry out longitudinal studies to get to the substance of what is going on, as Agile journeys can take a long time and require distinct mindsets to be thoroughly differentiated.

Since developing an Agile mindset is comparable to becoming a lawyer, doctor, or economist, it is necessary to have more specialized training in this area. This is what I’ve been suggesting. People that work with agile methodologies approach challenges in distinct ways, taking note of types of information, data, and concerns in their areas of expertise, and then analyzing those issues and coming up with unique solutions.

Years of training and practice have resulted in a wide range of attitudes and values, as well as distinct modes of thinking and problem-solving methods. Having an Agile mentality is not something that can be learned in a two-day workshop. Even though certain training and certificates exist, they fall well short of what is required, particularly at higher levels of accountability.

Agile leaders are currently emerging in an ad hoc manner, almost by chance. Agile management must become a legitimate profession on a large scale in the future. Schools of business might and should play a significant role in this. Find the best agile blogs on Blue Agile to sharpen your skills and knowledge.

How to Begin Your First Agile Project (with Examples)

Explaining Agile to the Dummies

Lean vs Agile: Understand Major Difference Between Both

Agile Ceremonies: Your Ultimate Guide to the Four...

Why No One Understands Agile, Scrum & DevOps...

Explaining Agile to the Dummies

Definition of done in agile