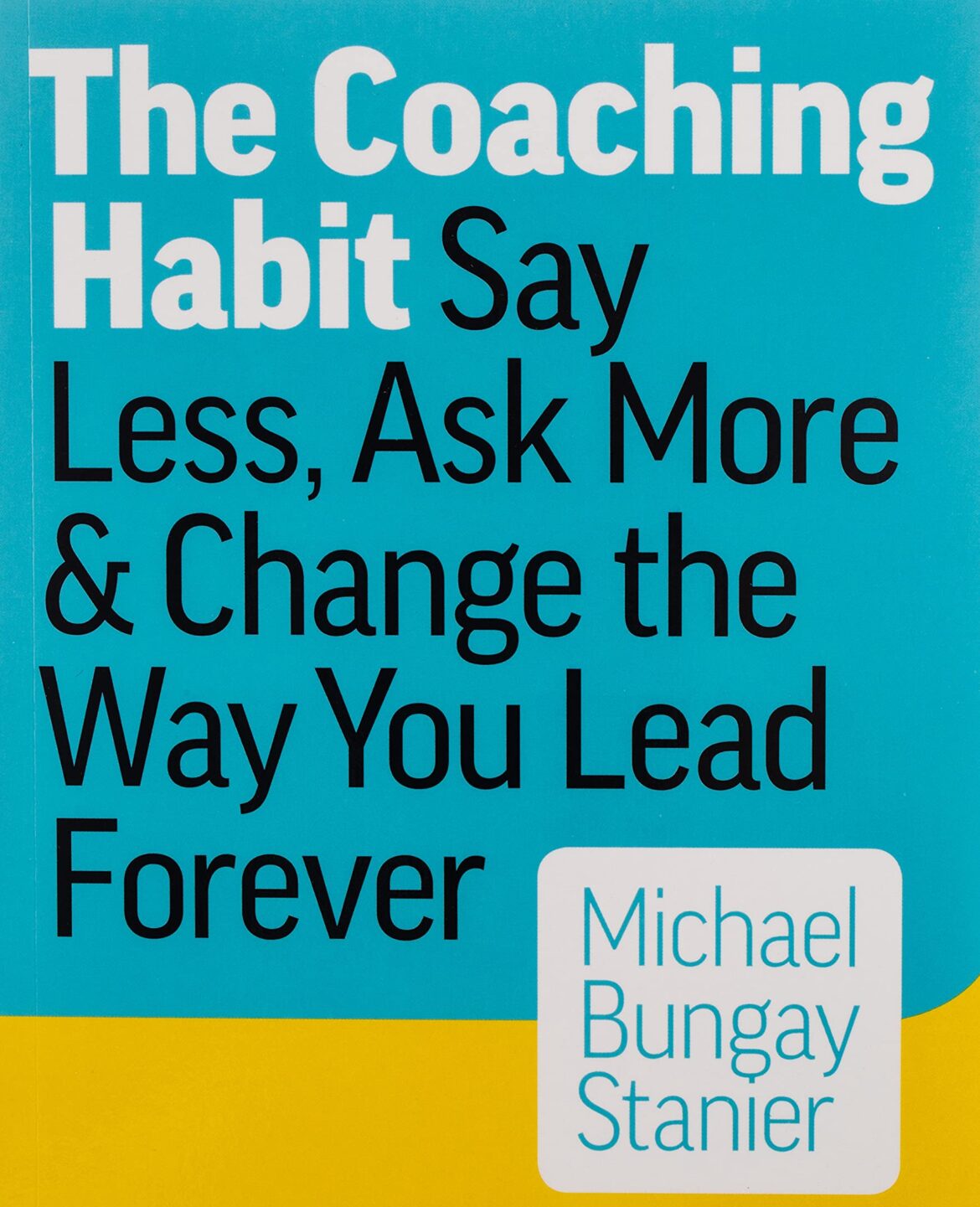 Introduction of the book – The Coaching Habit

“Say Less, Ask More, and Change the Way You Lead Forever” is the subtitle of this book, which sums it up very nicely.

For a while there, I assumed this was a book written BY coaches. Not at all! I feel relieved to have that off my chest. The purpose of this book is to help managers and leaders adopt a coaching approach to managing and leading their teams. To help busy managers coach in 10 minutes or less, Box of Crayons is Michael’s company’s mission.

But do NOT let that throw you off! I know as coaches, that we train for months/years and spend thousands of dollars to develop and hone our talents. But Michael’s not arguing that anyone can be a coach in 10 minutes, but his very laudable goal is to bring a better, coaching style to the way people lead. And, oh, does the business world need more of a “coaching approach”!

So, Who Should Read this Book?

Well, give it to your manager and leader clients – if they’re interested in being stronger leaders, who want to build a more engaged, purposeful and resilient workforce.

Executive and leadership coaches, as well as those who work with clients in the workplace, can benefit greatly from this book’s suggestions on how to better serve their clients.

And read it yourself if you’re a coach! It’s a wonderful coaching primer. The experience will also serve to remind you why you became an experienced coach in the first place.

More about The Coaching Habit

Even though it’s a slim volume, it packs a punch! There are loads of other resources given for follow-up, and valuably, at the start, Michael offers a chapter on “How to Build a Habit” with 5 components needed to build a new habit – this is quite helpful.

Michael gets right to the meat of the topic in each chapter which makes it interesting for folks with hectic schedules and want to access particular material quickly without wading through the weeds. The layout is easy to browse by newbie coach or seasoned coach – coaching information at one’s fingers so-to-speak.

And whilst this book is intended at leaders, executives it managers, it’s a fantastic reminder of why we coach – and contains a focus on essential coaching skills, such listening, empowering the client to own their own ideas.

Michael is obviously highly read, and also gives tonnes of important titbits of facts like: the brain is only 2 percent of our body weight, but uses 20 percent of our energy! Or the 5 types of triggers that might precede a habit.

Chapter-by-chapter, Michael shares his thoughts on the Seven Powerful Essential Questions in “The Coaching Habit.” Each chapter concludes with a section on developing a new “habit” based on the central objective of the topic. Each question also contains a “Masterclass” chapter that delves deeper into the rationale of each coaching question.

Seven coaching questions form the backbone of this book.

Each question is introduced in its own chapter, concluding with a brief scientific summary of its effectiveness.

Between the habit and question chapters, the reader is guided through a reflection exercise to select the specific trigger that should prompt the coaching question rather than the default counsel.

1. The Kickstart Question: “What’s on your mind?”

The first answer someone offers you is hardly ever the best answer.  The AWE question allows you to go deeper, helps you create a pattern of inquiry (rather than default back to “advice mode” after the first question), and it buys you some time to actually find out what’s going on.

3. The Focus Question: “What’s the Real Challenge Here for YOU?”

Rather than concentrating on the initial obstacle, this strategy goes after the true problem. Motivates one to refocus his or her attention on themselves and the impact they can have on others.

4. The Foundation Question: “What Do You Want?”

Clarifies (for you and the individual you’re teaching) what’s the conclusion that they seek. What they are genuinely asking of you or another individual. Reminds the person that you are on their side and care about what they’re wanting to get out of the scenario.

Clarifies (for you and the individual you’re teaching) what’s the conclusion that they seek. What they are genuinely asking of you or another individual. Reminds the person that you are on their side and care about what they’re wanting to get out of the scenario.

6. The Strategic Question: “If You’re Saying Yes to This, What are You Saying No To?”

In a world of constrained time and resources, every “yes” has an opportunity cost, something that you won’t do as a result. That influence can be best documented looking again at project, people and patters.

7. The Learning Question: “What Was Most Useful to You?”

It implies the dialogue was useful and invites the individual being coached to think on the value they gained out of the conversation. Ending with the positive assessment on the value leaves a favourable remembrance of the value they got out of it. It also gives you as a coach vital feedback on your coaching and allows you to perfect your habit.

A small variation of this question can also be used as a conversation starter: “what have you learned since we last met?”.

The Coaching Habit: When Should You Use It?

As a coach, manager, and parent who employs the coaching habit, Michael reduces the amount of time he spends talking by roughly 60 percent, resulting in more precise communication that allows the other person to take responsibility for and own their own responses and actions.

Coaches can utilise this book to make coaching a regular, casual part of their lives at the workplace as well as in their personal lives and social circles, according to the author. Asking and answering these seven questions will help you communicate more effectively with your clients, colleagues, family, and friends.

What can be done to improve The Coaching Habit?

For me, especially considering the length of this book, I think it’s a terrific read. I suppose you could read it in one sitting.

The one thing I wasn’t so keen on was that each question had some “study” added that apparently backs up why each question works. However, the applicability of this research feels a little tenuous to me and I don’t think that it adds much. Maybe the publisher requested Michael to include more research? It’s a powerful and inspiring small book, except from that.

The following are five good reasons to read The Coaching Habit

If any of the following describe you:

All in all, I found the book to be a valuable resource that gave me several takeaways that I’ve already put to use in my professional life.

When writing a great book, the author often chooses to use a longer page count (+100 pages) in order to cover more nuanced ideas and key insights that might otherwise be omitted in a more condensed format.

Good books can be summarised in a long article while still retaining more than 80 percent of their value. Good, but not great, is how I would describe – The Coaching Habit.

With a clear distinction between “giving advice” and “providing coaching,” the book sets the tone early on by arguing persuasively in favour of the latter. A behavioural approach to change is required, as this shift from “advice” to “coaching” is a behaviour change effort. Once the triggers that typically lead you down a “advice” path have been identified, it is deliberate to go down the “coaching” path instead.

You can purchase the book from AMAZON.

How to Begin Your First Agile Project (with Examples)

Programming books that aren’t dry and boring but...