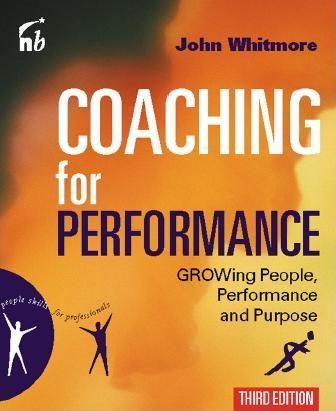 It’s an exciting time to be a book reviewer specifically when it come to the named ones-Book Review : Coaching For Performance by John Whitmore . Once confined to print newspapers and journals, reviews now dot many corridors of the Internet — forever helping others discover their next great read. That said, every book reviewer will face a familiar panic: how can you do justice to a great book in just a thousand words?

As you know, the best way to learn how to do something is by immersing yourself in it. Luckily, the Internet (i.e. Goodreads and other review sites, in particular) has made book reviews more accessible than ever — This is one of such a book review.

Articles of this blog on – Steps to Improve Your Coaching Presence as a Coach or Get Comfortable with Mindful Silence and used to the power of it are taking traction.

Coaching has the ability to transform leaders into more effective leaders, as Whitmore argues in very clear language and with compelling evidence. He is a great believer in the ROI (Return on Investment) of coaching, emphasising the benefits of such an investment. He also lays a significant emphasis on his GROW model, which stands for Growth, Opportunity, and Resilience. Everything said above will be quite valuable when you are attempting to sell your service or notion for organisational change to an organisation.

Despite the fact that Whitmore asserts that “there is no one right approach to coach,” The author gives tools to help readers achieve best practise while also urging them to “embark on a personal journey” in order to establish “the circumstances for learning and growing” for both themselves as well as their organisations.

In order to fully embrace coaching as the leadership style of the future, Whitmore believes that psychological optimism is required. The importance of team members’ self-belief and self-worth to the organisation is expressed, and Whitmore states that this is ‘…created by the perception that they are deserving of making decisions. Promoting someone without providing them with genuine empowerment and the opportunity to express their potential is unproductive.’

Coaching is described as a facilitator, and a coaching culture is defined as one that fosters the conditions for peak performance. Whitmore believes that emotional intelligence is a life talent that can be taught, and that it is a crucial skill for leaders of all levels of authority. Coaches can help people achieve a higher level of awareness, both in themselves and in their interactions with others – allowing them to view themselves as individuals rather than as performers.

In the future, successful leaders will use a coaching style rather than command and control to guide their teams. In the book, you will find examples of how to develop this approach, as well as examples of coaching discourse that demonstrate both effective and bad coaching. The examples are discussed and analysed in detail, which is quite beneficial. Whitmore’s GROW model is used to demonstrate optimal practise in a variety of fields. A coaching question tool kit is included at the end of the book, and numerous examples of impactful questions are presented throughout the book. I intend to put these to use in my profession. Whitmore believes that a group of self-actualizing persons would soon reach the dizzy heights of co-creation and achieve amazing outcomes in the interdependent stage if they worked together.

You can listen to the book via audible: Coaching for Performance, Fourth Edition

Summary: “Coaching for Performance” is a great product that contains a plethora of information and expertise that may be applied. This book is really convincing, and it will have a significant impact on any leader who takes the time to study it.

GROW, a framework developed by John Whitmore, is one of the most popular coaching frameworks. This book also discusses the framework in great detail. In just 182 pages, John Whitmore manages to cover a lot of material. He begins the book by arguing for the definition and use of coaching. Defining coaching in the first chapter lays a solid framework for the book’s remaining 21 chapters, – The Manager as Coach, The Nature of Coaching, Goal Setting, What is Performance, and Motivation.

I chose to review in four to five chapter groups which makes things easier to be put in perspective.

The first chapter, What is Coaching?, will provide you with an overview of what coaching is, as defined by the author: Coaching is the process of unlocking a person’s potential to enhance their own performance. It is assisting them in their learning rather than instructing them. The chapter discusses the origins of coaching and its prospective applications.

Chapter 2 discusses the manager’s role as a coach. The author begins the chapter by examining the paradox of a manager working as a coach since, while they are accountable for their reports’ performance, they also aim to grow them effectively. These two objectives can occasionally conflict with one another. Whitmore believes managers can be effective coaches and explains why this is so.

Chapter 3 examines the nature of change, examining why it has become the norm in the modern day, as opposed to the past, when society was considerably more stable. This chapter lays the groundwork for understanding how coaching might assist us in adapting to change.

Chapter 4, titled “The Nature of Coaching,” discusses the two pillars of coaching: awareness and accountability. Whitmore asserts that “the essence of effective coaching is the development of awareness and responsibility.” These two ideas are described in detail, with examples provided. Additionally, the connection between the two principles and our mind is discussed, and there is a section on the characteristics of a coach.

Chapter 5 delves into the practical side of coaching. It addresses how to ask good questions, including the purpose of inquiries, open questions, body language, self-awareness, and examples of effective questions. The necessity of asking what, when, who, and how inquiries is emphasised, whereas why queries are avoided.

The GROW structure, which is referred to as a sequence for asking coaching questions, is introduced in Chapter 6 titled Sequence of Questioning.

The following four chapters (7–10) provide a considerably more detailed explanation of the GROW structure. Each component of the framework is explained in detail in a chapter.

Chapter 7 begins with the letter G, which stands for Goal Establishment. The necessity of beginning a coaching session with goal setting is emphasised, and an example of a session demonstrates the kind of questions to ask in order to establish goals is included.

The R in Chapter 8 stands for Reality; it is all about determining what the reality of the scenario being discussed in coaching is at the moment.

The following chapter is the O, which stands for options. Questions are used to develop potential solutions that may assist the individual being coached in accomplishing established goals.

What is Performance? is the title of chapter 11, and Whitmore defines performance as going above and above the call of duty. In other words, establishing high standards and pursuing them. Whitmore feels that coaching can assist in attaining such lofty goals.

Chapter 14 is titled “Coaching with a Purpose.” It is about how coaching can assist individuals in discovering a more meaningful existence. A variety of sample questions are included in this section.

Chapter 15 is, in my opinion, a continuation of the preceding chapter, titled Coaching for Meaning.

Chapter 16 discusses corporate coaching. It examines the ways in which coaching might be made more relevant to businesses.

Chapters 18 and 19 cover how to use coaching to develop teams, while chapter 20 discusses how to overcome coaching impediments.

Chapter 21 discusses the benefits of coaching, and chapter 22 concludes the book with a brief concluding chapter on why the author believes coaching is one of the most successful ways to develop people and also a more efficient way of doing business.

What are Kanban Swimlanes and How Do You Use Them?

Programming books that aren’t dry and boring but...