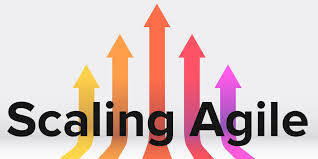 It will also show large-scale organisations valuable insight as how to improve their undertakings and also point out what skills leaders need to possess in order to succeed in Scaled organisations. With such information, organisations will know what skills and attributes leaders and managers need in the day to day organisational interactions.

With such information can organisations fast track their operational process and achieve maximum production at the same time eliminating waste.

As organisations have grown in numbers, it has been a challenge to organise teams that make up the organisations. Since digital transformation has upended the old ways of doing things, and with the need for flexibility and agility, organisations have seen the need to adopt Scaled agile practices to boost their productivity.

In the light of such admissions, this article seeks to spell out the testimonies of leaders of organisations that have undergone the transition from traditional ways to Scaled agile methodologies. Examples include leaders of large companies such as banks. When you look at it, banks are made of big corporates.

For these corporates to succeed, their transformations were pushed by the need to provide better customer experience to customers. These fresh and agile methods of working result in organisational cost reduction.

Experts have described Scaled agile frameworks method as the capability of companies and organisations to read well the market and take advantage of the market with great speed. Other experts have commented that Scaled agile practices improved the said organisation’s wherewithal to navigate to uncertainties in the environment in a proactive way.

For organisations to benefit from flexibility in their organisational work, they need to implement Scaled agile frameworks. This transformation is fraught with challenges, since it questions the traditional ways of working. But this challenging transformation is, to be blunt about it, one of the biggest issues and responsibilities that managers in the organisations have to face.

These Scaled agile ways, and the transformation thereof of such ways, puts more pressure on leaders as they now have to face previously unknown challenges.  Transforming traditional organisations in a way that make them benefit from scaled agile frameworks method requires change in how organisations are led. This transformation demands fresh types of management. Challenges that leaders in Scaled organisations face are that they have to lead a big number of self-ruling and self-organising groups. The challenge is to get these disparate groups working together in a united manner so as to reach a common goal.

Scaled agile frameworks methods require that different groups operate autonomously. This sees leaders and managers transform from being the one individual that all people report to. The self-organising groups will meet their targets independently. The targets are achieved by work that is iterative, work that goes through short cycles. These cycles are meant to deliver solutions to customers, making it easy for feedback from them much quicker. The feedback is then used in subsequent improved and better short cycles. Bureaucracy and hierarchy, as favoured by traditional managerial practices, do not work here.

The Business Agility Institute in 2019 produced an industrial report that stated that leadership styles were the biggest challenges faced by organisations in the adoption of Scaled agile frameworks.

That organisations will benefit from transforming from traditional management methods is a well-established fact. Scaled agile frameworks have also been used increasingly by organisations that offer financial services. That said, there are worries that not much is known about the requirements needed from leaders practising Scaled agile frameworks. This has led to worries that the challenges faced by leaders in charge of the transformations are being ignored.

Scaled agile organisations cannot succeed without leaders. What this means is that if organisations do not engage their time on the challenges that leaders face, the organisations will be in no position to give such leaders they support and help they need.

For this, and other reasons, this articles will spell out the challenges as faced by leaders who have in charge of the transformation from traditional management to agile management.

Researchers worry that people and practitioners tend to use loose definitions of the word ‘agile’. So popular and used so widely that researchers believe that the terms has lost its original meaning. To run away from the danger of ‘agile’ losing its meaning, research points out that some companies have opted not to use ‘agile’ to explain their practices. Instead of ‘agile’, the tech firm, Google, describes it as ‘the Google way’.

It is easy to see where the confusion originates from. Having emanated from manufacturing, agile and agile methods as concepts, then moved to the Information Technology software as necessitated by software products that had become clunky, complex and cumbersome. These software products needed to be improved continuously.

The Emergence and Need of Scrum

To deal with this challenge of not being able to see what opportunities and challenges that lay ahead in the future, there are a number of frameworks that are used in the industry. Examples of such frameworks or methodologies are:

Obviously all these methodologies differ, but what you can find common amongst them is that they are premised on the philosophies of agility.

While agile methodologies were originally intended for small teams, transforming them for larger corporates has its challenges. Most of these challenges stem from the fact that large organisations are sluggish. Their sluggishness are reported to limit processes that bring change. Their sluggishness also stem from the fact that people want to honour traditional systems and hierarchical structures.

More challenges faced by big organisations is that they have global footprints. Think of Coca Cola, etc. This global distribution makes it hard for groups to meet in one single place. What this does then is suggest that large globally distributed organisations need to rely on agile methodologies.

Examples of large corporates that have successfully transformed from traditional structures and traditional management to agile methodologies are Barclays and Microsoft.

There are many other frameworks that have been developed to meet the needs of organisations in the process of scaling up and taking up agile practises. Some frameworks are listed below:

The challenges of transforming from traditional management to agile methodologies lies inherently in the bigness of the organisations. The challenges stem from controlling and managing people (workers). When groups number to two they have become large-scale. From ten to more groups is ‘very large-scale’.

Digitally native companies – that is, companies that were digital from the onset when they were first created or founded – have higher levels agility. Those created in the era of traditional management, having to transform digitally – are not easy to transform than their ‘born agile’ counterparts. There is less agility and flexibility in these companies. Meaning that they are forced to change their management practices, a thing which is fraught with difficulties and challenges. To drive the point more powerfully, it’s worth noting that ‘born agile’ and ‘born digital’ organisations or companies face different challenges.

One of the major challenges of transforming to agile methodologies is that they were difficult to put into place. Another challenge was that there was insufficient organisational support to aid managers in the successful implementation of the principles. As a result of managers being under-supported, the entire implementation ran the risk of complete failure.

This observation led to proposal that a change in the culture of organisations and engaging managers in the transformation process would succeed if taken into consideration.

The obstacles that lay in the way of successful transformation are said to consist of: leaders and managers not knowledgeable about agile. The managers lacked knowledge as to what agile frameworks were and what they could be used for. This, coupled with cultural issues faced by organisations and the people involved to distrust each other as well as the processes/transformation.

In conclusion, it is fair to say that the challenges faced by organisations in the implantation of agile frameworks have been successfully identified – at least some of them. But identifying the challenges that agile transformation goes through is a continuous thing. It is of the essence that organisations become familiar with these challenges.

Only until these challenges are confronted and dealt with, will organisations be in better positions to fully benefit from the advantages brought forward as a result of technology, software and agile methodologies. Only then will managers sing the praises of these innovative frameworks. Only then culture between people improve and leadership flourish as well as see higher level of engagement between people.

What’s behind the hype around DevOps and Agile...

Why No One Understands Agile, Scrum & DevOps...

How to Make an Agile Transformation Work?

Five ways to use company’s talent pool for...

Factors that contribute to the success of an...

Transforming Culture: The Road to Reinvention and Renewal

How Real and Big Is the Hybrid Work...